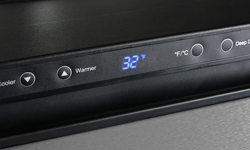 A digital temperature display with push button controls makes it easy to set and verify the internal temperature of this homebrew beer cooler. Instead of having to guess what temperature the number on a manual dial will produce, these digital controls allow you simply press an up or down button to adjust the temperature by 1 degree. The LED display can be set to either Fahrenheit or Celsius. 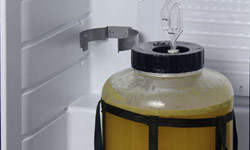 Thanks to fan-forced cooling, Kegco HBK309 home brew dispensers feature even and consistent cooling and one of the coldest temperature ranges of any keg dispenser on the market today. The temperature can be set as low as 32 degrees to dispense ice cold homebrew, or set high enough to act as a fermentation chamber for your fermenting brew. 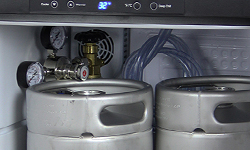 This keg beer refrigerator has a spacious interior that is large enough to hold up to three ball lock home-brew kegs. This allows you to dispense from two kegs while keeping a third cool for later. If you'll be using this kegerator to ferment your home-brew, it will easily accommodate a 6 gallon bucket or carboy. 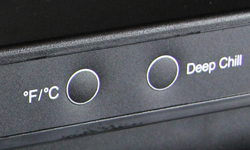 The HBK309S-2 has a Deep Chill function that forces the compressor to work continuously for 24 hours to quickly cool down a warm beer keg. Simply press the Deep Chill button to activate this function, and press it again once your keg has reached the desired temperature to return the unit to its regulator operation 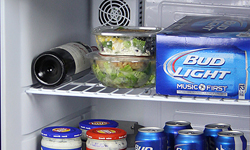 Converts to a Refrigerator with 2 Shelves

When you're not using this kegerator to dispense delicious home-brewed beer, it can be easily converted into an all-refrigerator for extra food and beverage storage. The two included adjustable shelves can be placed far enough apart to hold gallon jugs or 2-liter bottles, and the wide temperature range makes this unit suitable for storing bottles of wine. 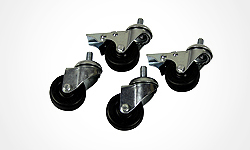 Easy-roll casters make it easy to move the HBK309S-2 from the kitchen to the patio for your next backyard barbecue! Once the kegerator is where you want it, the casters can be locked to prevent it from moving again until you want it to.

* - Letting the Deep Chill function run for the full 24 hours may result in freezing of the keg.

All Standard Shipping shipments made via Common Carrier are for curb-side service only. Use of a lift-gate or inside delivery service will carry additional charges. When receiving shipments from Common Carrier it is recommended the Buyer have two people to help receive and move the item. Please contact us for white glove service deliveries.

No shipments or deliveries are made on Saturdays, Sundays, and holidays. Kegco is not responsible for delays in shipping due to weather, mechanical failures, typographical and/or transcribing errors, and others factors beyond our control.

Our quality products are built to last for years of use for the draft beer enthusiast at heart. Our core focus is to produce solid products that are practical, functional and visually appealing all while creating a strong bond with our customers.

Sign up to get the latest on sales, new releases and more…